You are using a web browser that may not support the design features on this site.

For the best experience, please switch to another browser. We recommend Chrome or Firefox.

A Dental Team You Can Count On

Since our family practice first opened in 1980, we have focused building long-lasting relationships with our patients. We are honored to be the trusted dental home of countless families, and we always welcome new patients to our practice. Reliable, timely dental care is important for maintaining a healthy smile. Rest assured that you will be cared for by the same skilled and experienced family dentists each time you visit.

We consider it a privilege to serve our community in Metairie, Louisiana and beyond. We are always here to support you and your family on the journey to optimal dental health.

Personalized Care for Every Patient

Our passion for what we do can be seen with every interaction we have, who genuinely enjoy coming to see us. We make appointments convenient and easy, and we enjoy getting to know our patients on a personal level, learning about their lives and interests. We are proud to be the trusted dental home for countless families and welcome you to join our dental family!

To learn more about our team at Cowley Dental Care, please read below about our dentists and staff. 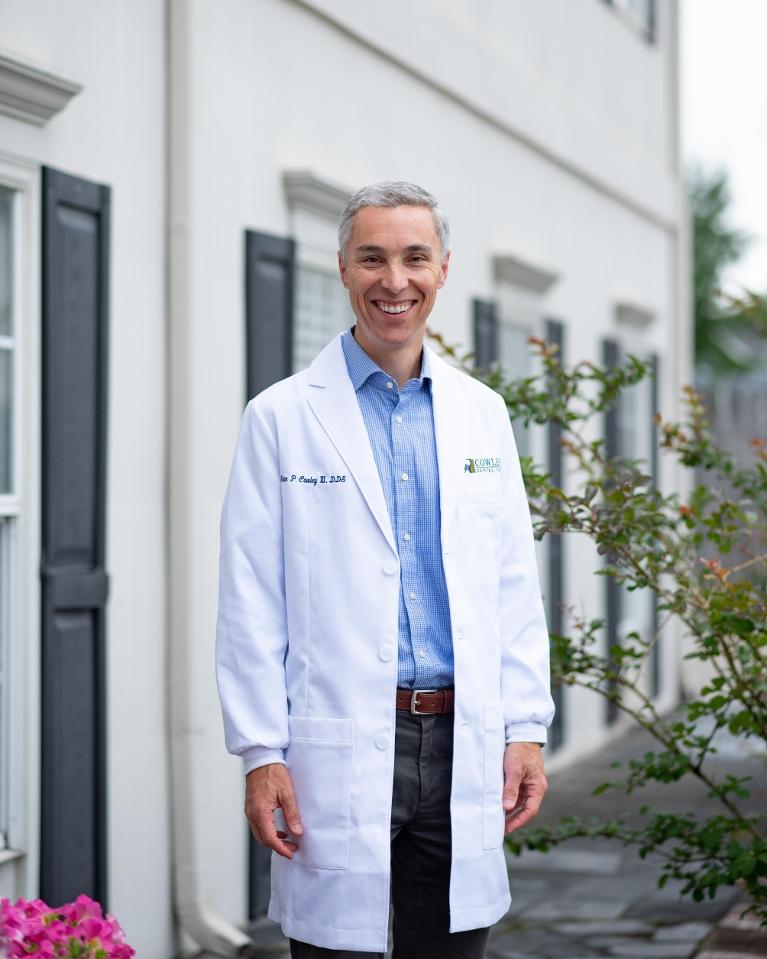 Dr. Stan P. Cowley III is a 2003 LSU School of Dentistry graduate. He has been in private practice for nearly 20 years. Prior to attending dental school, he studied at LSU in Baton Rouge and is a graduate of Jesuit High School in New Orleans.

At an early age, he was interested in the dental field and aspired to become a dentist, following in his father's footsteps. As a high school student, he made retainers for a local orthodontist, getting his first taste of dentistry. He continued training in the dental field while attending LSU by working as a dental assistant alongside his father. However, it was not until he entered private practice with his father that he truly realized his dream. Today, he continues to live out that dream by treating his patients and growing the practice his father began over 40 years ago.

Dr. Stan enjoys spending time with his wife Amy and their five children: Christian, Elizabeth, Mary Claire, Catherine, and Michael. When he's not practicing dentistry, he can be found at the ballpark coaching his children, at the lakefront exercising with his friends, or camping with his family. 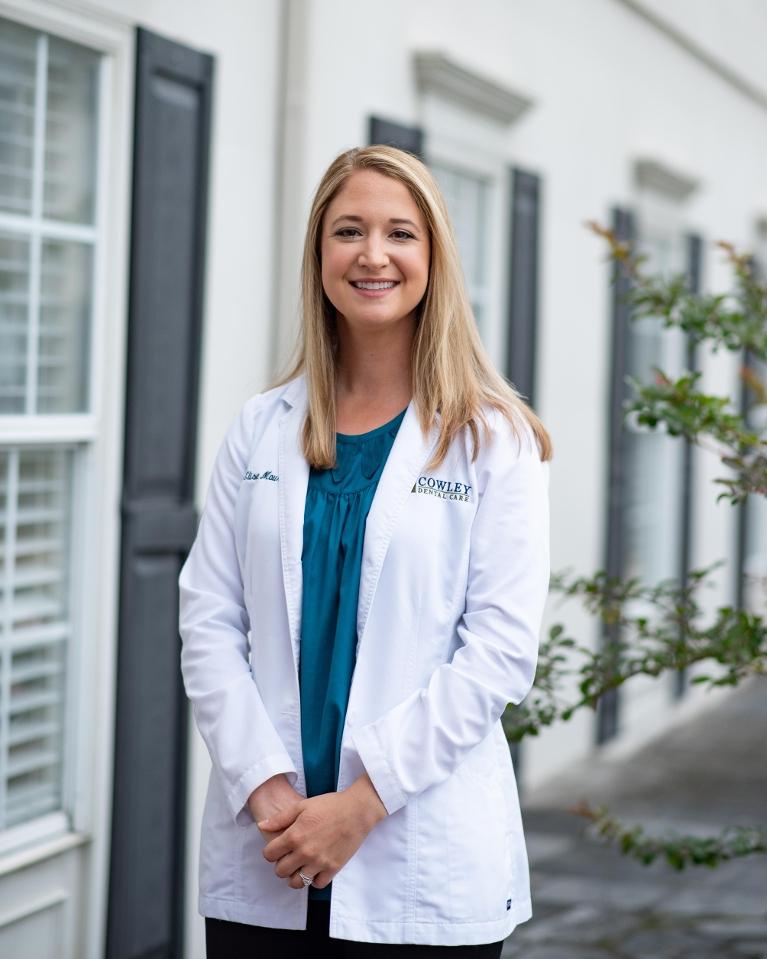 Dr. Elise Mouras Roth officially joined our practice in 2018. During her undergraduate studies, however, she trained as dental assistant at Cowley Dental Care, where she realized her aspiration to become a dentist. She earned her undergraduate degree from LSU in Baton Rouge. She then continued to LSU School of Dentistry where she earned her dental degree. Upon graduation, she continued with post-graduate studies by completing a one-year Advanced Education in General Dentistry Residency program at Texas A&M University College of Dentistry. During her residency, she advanced all aspects of her dental education with a focus on restorative dentistry and the restoration of dental implants.

Dr. Roth is a lifelong resident of New Orleans and an alumnus of Mount Carmel Academy. She and her husband Randy enjoy cooking and entertaining friends, spending time with family, and spoiling their two dogs Frank, a Rhodesian Ridgeback, and Blue, a mini-Australian Shepherd.

Dr. Stan Cowley, Jr. has been practicing dentistry for over 45 years. He graduated from LSU School of Dentistry in 1975. He then completed a General Practice Residency in the United States Navy, serving four years of active duty and eight years in the Reserves. Before that, he earned his Bachelor of Science degree from LSU in Baton Rouge.

Over the years, he has taken numerous mission trips to Guatemala, Colombia, and Honduras to serve the dental needs of those in need.

Dr. Cowley and his wife Isabel have three sons and seven grandchildren. He enjoys traveling, spending time with family, and working on projects around his house.

Claire has a customer service background. She worked at Reginelli's Pizzeria while going to school to become a dental assistant.  Since joining our practice in January 2022, she enjoys making patients feel comfortable during their appointments by reassuring them while helping them achieve a beautiful smile.  In her spare time, Claire enjoys gardening and working in the yard.

April is a dental hygienist trained at Louisiana State University’s School of Dentistry and Loyola University New Orleans. She began her dental hygiene career in 1989 and became part of Cowley Dental Care’s team in 2009.

April enjoys teaching her patients about proper maintenance of their oral care at home, and she always reviews proper flossing and brushing techniques. She loves her patients and says they have become her extended family over her 30 years in the dental field.

Very active in her Catholic church, April serves on the parish council and attends women’s Bible study regularly. She enjoys listening to country music and cutting a rug every morning before work. In addition, April exercises daily, lifts weights, crafts, and chalk-paints furniture to express her creativity. Last but not least, she cherishes every moment she spends with her children and granddaughter.

Her favorite aspect of caring for patients' smiles is meeting and conversing with people from all different walks of life. As a hygienist, she provides adult and child dental cleanings, periodontal cleanings, x-rays, and oral health education.

A busy mother of very active children, Lisa enjoys bonding with her kids over their favorite hobbies and extracurriculars. Lisa is also an avid reader who loves to kick back, relax, and dive into the pages of a good book.

Dari is a dental assistant and office manager who has been a valued team member of Cowley Dental Care for nearly 35 years. Dari became a certified dental assistant in 1990 after she completed her education and in-office training. Caring for patients’ needs from chairside to the front office, Dari shows each of our patients how much our team genuinely cares and values our dental family. Outside of the dental office, Dari dabbles in do-it-yourself projects and cheers on her favorite sports teams.

Walkidia is our friendly and knowledgeable front desk assistant. She trained at Remington College and has been a valued member of Cowley Dental Care since 2005. Walkidia enjoys interacting with patients and helping them better understand their dental care and insurance coverage. Walkidia and her husband are proud parents of two children, and they enjoy traveling to visit their family in Honduras.

Truc is a dental assistant who earned her diploma from Blue Cliff College. She has been part of Cowley Dental Care since 2015. Truc is an expert at making patients feel calm and comfortable during their visits. Truc’s favorite aspect of dental assisting is providing a pain-free and stress-free experience, and she delights in getting to know patients from all walks of life. When she’s not assisting patients, she enjoys spending time with her boyfriend and their cat Dio.

Rosie is a dental assistant and college graduate who earned her training through hands-on experience at Cowley Dental Care. Rosie trained with Drs. Cowley after graduating from Delgado in 2017. Rosie’s favorite aspect of dental care is developing long-term relationships with her patients. When she’s not trying new restaurants with her family and friends, Rosie can be found getting active at the gym or outdoors.